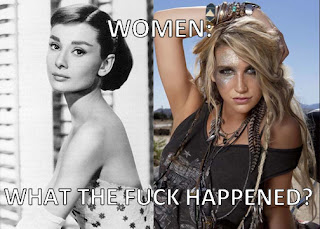 Mass media is too powerful/invasive and has led to the destruction of the feminine aspect of Western culture - which once represented wisdom and nurturing, and replaced it with "empowering" whore archetypes such as the airbrushed, nymphomaniac dregs on shows like Sex and the City. This has derailed Western society away from notions of feminine wisdom towards a completely superficial narcissistic bling-culture-on-herpes-medication in heavy Max Factor packaging. Because this is how the present psychopathic mainstream considers women to be.

Society should be female - currently, society is a psychopathic male in terms of what it delivers to all of us.

This damages both men and women - as most men today expect a woman to be a tart, and many women seek and marry plastic surgeons in the hope of not being discarded. So Western society has become increasingly misogynistic even with the success of women's lib and so on. A man can not marry a woman who is intelligent, loving and secure unless she is also "hot" - likewise, women are coached to look for men who will finance their media driven delusions of what being beautiful is. The rest of us are discarded for not being superficial enough. Psychopaths control the mass media and this insanity has distorted a lot of the population to emulate this pathology as the new norm.

The male psychopaths in charge are Gaslighting women through the media - while turning men into adult children. The spiritual vacuum (and I am not talking religion here at all) left in many people is filled with a distorted sense of self. If your soul has been made empty, you will seek to fill it with nothing of any value regardless of the price tag, or what pointless social status it furnishes you with.

We need to shut the Psychopathic Control Grid down through awareness and creative non-compliance. Then we will get the society we deserve.

Bridget Jones is not cute, charming or symbolic of modern womanhood. She is a vapid, stupid mess and this is what the ones charge want - makes women easier to control and buy stuff to try and repair the dysfunctionality  mass media has created in the first place.

Thomas Sheridan is an independent alternative artist, author, satirist, musician, public speaker, broadcaster and researcher currently based in the West of Ireland. His illustrations have appeared on the covers of newsstand magazines, books and websites worldwide.

The Anvil of the Psyche is considered a vital manual for personal and social survival in a world controlled by greed and false hopes. Thomas' writings and interviews have evolutionised people to build a firewall around their own psyche and not to be lured into handing over personal independence to an exterior collective or guru. As a result, his NO CONTACT EVER AGAIN philosophy applied to controlling individuals and groups has made Thomas an enemy of mind-controlled death cults and neo-Nazi fringe groups.  Thomas has also been featured in several films and documentaries.
Posted by Thomas Sheridan at 8:53 AM